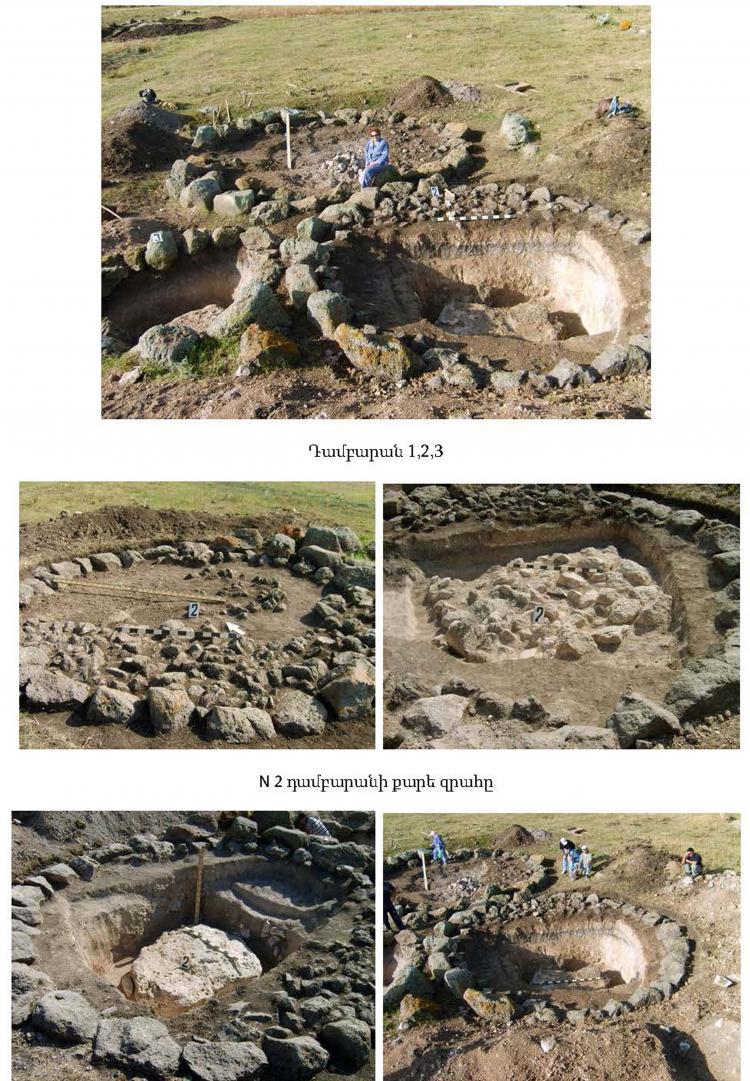 Kourtan village of Lori region is rich in ancient settlements. In 2006, the Lori fortress expedition team (head of the expedition, Dr. Seda Devedjyan) conducted archeological excavations in the old tomb field of the village, which was largely devastated, it became an arable land. The preserved area around 1000 square meters was saturated with late bronze and early iron eras dense network of cromlechs. Many fragments of early Bronze Age Ceramics, found in tombs evidence suggests that, before the tomb field there was an early Bronze Age residence area.

Four tombs have been excavated, three of them (No. 1-3) was an early iron and one (No. 4) was belonging to the late Bronze Age.

The first three tombs that have circular and egg-shape cromlechs are almost adjacent to each other. Other cromlechs adjacent to those are visible on the unopened surface of the ground. The average diameter of the cromlechs is 4-7 meters, have a small stone-made of armor. The Tombstones are slab-box and rectangular. Directed mostly from the north-west to the southeast with a small sloping. Slabs are mummified carefully, on the four sides and on the sloping surface filled with small and medium sized stones are reinforced with whitish clay.

In box No. 1 slab-box was buried   middle-aged "long-skulled" man, lying on right side with very shrunken limbs. The No. 2 was a memorial tomb and in No. 3 there were no human remains (the tomb was not clean enough).

Two of the sculptures are probably rams (one's head is broken); the other is a lion. These are be framed with bearded beans. Aries has a male beginning. According to Shirakatsi's bibliography, Aries constellation includes seven stars (remember the seven luminescent of the clay lip). Lion is the symbol of the summer sun and the fire. The claws were be used for fire, water or space bodies, lighting ceremonies. Here the lion and the trunk are opposite, as in the zodiac, the lion and the Aquarius. The pot has its parallels in the northern regions of modern Armenia (Noyemberyan, Sanahin, Ayrum, Ijevan, Lori Berd, Teghout, etc.). We meet these met at the end of BCE II thousand and BCE I thousand beginning monuments linking to certain beliefs.

The tomb chamber of the tomb No. 4 was groundbreaking,   irregularly rectangular, slopping to north-east to south-west. On the floor, there was a middle aged long skulled man skeleton, lying on the right side, with a shrunken limbs. Ten clays were found, as well kitchenette, smoky and coarse, ornate and pots, cups and more.

The most remarkable are the two large, black glittering jugs in their form and finishing manner,   as well as a spherical, squirrel belt magnificent jug, made with pectinate blunt tool. Similar ornaments have Lchashen (III Diabaablur), Lori Berd (Tomb No. 15), Trelee (Tbilisi), Udabno (Caketia) 2nd half millennium BC dated jars. The same ornament sometimes was found on black clays with red and white dyes. In Average Bronze this was favorite decorating in jewelry. The scroll (gray) belt with its repetitive, rhythmic ways, probably expresses the vitality of life, while the coils reminding the snakes, as a symbol of moisture and fertility. Large-scale, rough boilers are also featured in this era, which are found in rich tombstones with magnificent, twisted claws (Lori Berd, Tomb # 15). The tomb of Kurtan No. 4 dates back to the 9th century BC. XV-XIV centuries. Unlike Lori fortress, the late Bronze and Early Iron Mausoleum has a significant presence in the presence of red-surface clays and scarcity of metal. The bones of cattle are predominant in Kurta.

About the tombstones with circular cromlechs, Prof. Harutyun Martirosyan was mentioned in his substantive work. Discussing the metal items of a ruined mausoleum, he finds that they are few in Armenia, they associate with the materials of the Scythians tombs and cites and dated BCE. VI-V centuries (see A․A․ Martirosyan, Epoch Bronze and Early Iron Age in Armenia, 1964, pp. 181-191, Table XXXII).